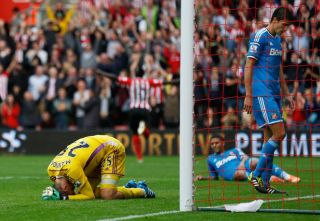 Visiting fans made more than a 600-mile round trip in the Premier League, only to see their side humiliated by a series of defensive errors.

Santiago Vergini's inexplicable own goal started things off, and Sunderland continued to contribute to their own downfall as the goals kept coming.

After the game, goalkeeper Vito Mannone revealed he wanted to make amends to the supporters.

It was only the sixth time in Premier League history that a side had been beaten by eight goals or more, and on Tuesday the club announced that fans were entitled to a full refund.

"Sunderland's players have today offered to refund supporters the cost of their match tickets, as well as supporting a local charity, following Saturday's defeat to Southampton," a statement read.

"Fans who do not wish to claim a personal refund will have the cost of their ticket donated to Sunderland-based children's hospice Grace House."

Captain John O'Shea, who recently signed a new contract at the club, expressed his gratitude towards the fans for making the long journey from the north east to the south coast.

"We win and lose as a team, players, staff and fans, however we wanted to acknowledge and thank the supporters who travelled such a long way to give us their backing and despite everything, stayed with us until the final whistle," he said.