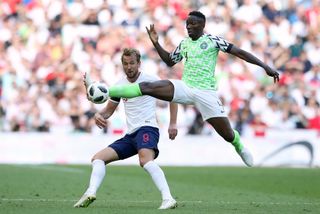 Nigeria became the first team to reach the last 16 at the Africa Cup of Nations by beating Guinea 1-0 in Alexandria.

The Super Eagles, who beat Burundi by the same score in their opening Group B game on Saturday, secured their place in the knockout stage thanks to Kenneth Omeruo’s second-half header.

Guinea proved difficult for Nigeria to break down, but were unable to rescue a point as they had done in their first match against Madagascar.

Leicester midfielder Wilfred Ndidi headed the game’s first chance just wide for Guinea from a corner, while Nigeria’s best moment before the break fell to Odion Ighalo, who fired an angled shot into the side-netting.

Arsenal’s Alex Iwobi forced Guinea goalkeeper Ibrahim Kone into a fine save just after the hour mark before Nigeria broke the deadlock.

Moses Simon whipped in a corner and Omeruo got in front of his marker at the near post to glance home the game’s only goal in the 73rd minute.

Nigeria’s appeals for a penalty soon after were turned down when Ahmed Musa’s cross appeared to hit an arm in a crowded area.

The Super Eagles play Madagascar in their final group game on Sunday, while Guinea must beat Burundi in their last match and hope other results go their way.

Guinea’s Liverpool midfielder Naby Keita was forced out of the game due to injury with just under 20 minutes left.