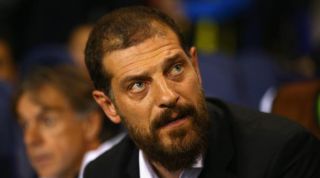 Slaven Bilic's men returned to domestic action in upbeat mood after Demba Ba's late penalty had earned them a point in a 1-1 UEFA Europa League draw with Tottenham in midweek.

And they notched a slender win against the top-flight newcomers courtesy of Mustafa Pektemek's 57th-minute winner.

The 26-year-old nodded in a right-wing cross after Balikesirspor had kept Besiktas at bay for long spells.

The hosts were left to rue a controversial refereeing decision a few moments later, as Sercan Yildirim appeared to be tripped when through on goal, but the official failed to award a free-kick or a red card to Ersan Gulum and Besiktas held on to take over at the summit.

Rivals Fenerbahce produced an immediate response to last week's 2-0 loss at Akhisar Belediyespor with a 2-1 home triumph over Konyaspor on Saturday.

They were forced to do things the hard way, however, as Irtegun Bekir was shown a red card just before half-time.

Like Fener, Galatasaray remain just a point behind the leaders, having despatched of Kayseri Erciyesspor 2-1 away from home.

Caner Osmanpasa's late strike gave the hosts a lifeline in the 81st minute, but goals earlier in the second half from Burak Yilmaz and Wesley Sneijder proved enough to earn Cesare Prandelli's side all three points.

Akhisar Belediyespor surrendered their place at the top of the table after a 4-0 hammering at Istanbul Basaksehir, while Trabzonspor's search for a first win continues after they were beaten 3-0 at Karabukspor, with coach Vahid Halilhodzic's problems continuing to mount.

Mersin Idmanyurdu continued their fine start to the season and sit second after they beat Bursaspor 2-1 in Friday's only match while Kasimpasa extended their unbeaten run to five matches with a 4-2 victory over Gaziantepspor.

There were first wins of the campaign for Sivasspor and Rizespor, as they defeated Genclerbirligi 1-0 and Eskisehirspor 2-1 respectively.