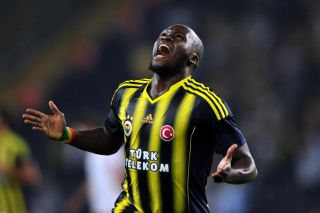 The champions had their all-African attack to thank for the victory, with Nigeria striker Emmanuel Emenike, Senegal forward Moussa Sow and Cameroon's Pierre Webo on the scoresheet.

Karbukspor twice got back on level terms through Dominick Kumbela and a Michal Kadlec own goal, but eventually left with nothing to show for their efforts.

Last season's runners-up Galatasaray also got off to a winning start when prevailing 2-0 at Bursaspor, with Burak Yilmaz opening the scoring after 52 minutes and Olcan Adin sealing it in the closing stages.

Besiktas bounced back from narrowly missing out on a place in the Champions League group stage when going down 1-0 to Arsenal by beating Mersin by the same scoreline, with Cenk Tosun hitting the back of the net just before the break.

Trabzonspor had to settle for a goalless draw at Erciyesspor, while Sivasspor suffered an early setback when losing 2-1 at home to Gaziantepspor, with Muhammet Demir bagging a brace after John Utaka had put the hosts ahead.

Eskisehirspor were another team to come from behind and claim victory when edging out Konyaspor, with Hurriyet Gucer equalising Gabriel Torje's early strike before Erkan Zengin netted the winner from the penalty spot on 76 minutes.

Istanbul Buyuksehir held on for a 1-1 draw against Kasimpasa after having Rajko Rotman sent off. Rizespor and Genclerbirligi also shared the spoils after Umit Korkmaz netted for the hosts following Guido Kocer's opener, while Akhisar Belediyespor won 2-1 at Balikesirspor thanks to goals from Saidi Ntibazonkiza and Mehmet Akyuz.