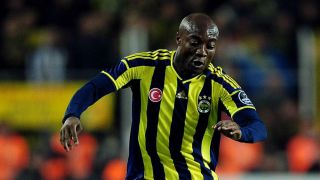 Turkey's top flight was suspended for one week following an attack on Fener's team bus by a gunman in the aftermath of their 5-1 victory at Rizespor on April 4.

Fener have since played a Turkish Cup game, which they won 4-1 against Mersin Idmanyurdu on Thursday, and they climbed to the summit after seeing off Bursaspor at the Sukru Saracoglu Stadyum on Monday.

It appeared as though Ismail Kartal's men were going to be held to a frustrating 0-0 draw, but Pierre Webo's sixth league goal of the campaign in the 84th minute proved decisive.

Gala had led the way, but Hamza Hamzaoglu's side suffered a 2-1 defeat at the hands of UEFA Europa League hopefuls Trabzonspor in an ill-tempered affair that saw 15 yellow cards and one red.

Emre Colak scored his fourth goal of the season for Gala to cancel out Ozer Hurmaci's opener.

Trabzonspor would not be denied, though, as Carl Medjani settled the contest in the 85th minute, who had Hurmaci dismissed deep in to injury time.

Sunday also saw Istanbul Basaksehir move into the top four thanks to a 3-1 win at lowly Rizespor, Eskisehirspor moved nine points clear of the bottom three with a 1-0 win at relegation-threatened Kayseri Erciyesspor and rock-bottom Balikesirspor drew 1-1 at Sivasspor.

On Saturday, Besiktas hammered nine-man Kasimpasa 5-1 - a result that leaves them second.

There were five different scorers for Slaven Bilic's side, including Demba Ba's 16th league goal of the season.

Kasimpasa have now suffered four straight defeats and they were left counting the cost of straight red cards for Baris Basdas and Adem Buyuk.

Furkan Ozcal's 67th-minute penalty helped Karabukspor win a league match for the first time since December, as a 2-1 triumph over 10-man Genclerbirligi breathed fresh life into their battle against relegation.

The weekend's action started on Friday with Gaziantepspor and Konyaspor playing out a 1-1 draw, while Mersin Idmanyurdu against Akhisar Belediye finished with the same scoreline on Monday.