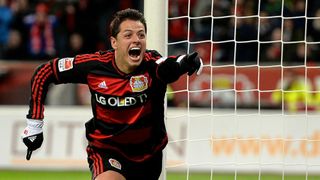 Mexico international signed for Bundesliga outfit Leverkusen in August and has revelled as the main striker, scoring 19 goals in 22 games across all competitions.

Hernandez was a surprise signing at Old Trafford, when Alex Ferguson secured his signature in 2010 and he went on to become an instant hit at United, scoring 20 goals in his first season to help clinch the Premier League title.

Under current United manager Louis van Gaal, Hernandez was loaned to Real Madrid in 2014-15, after the club signed Radamel Falcao on a season-long loan, before being sold last year, having struggled to impress the Dutch boss in the opening stages of the 2015-16 season.

But Hernandez believes his reputation as a substitute counted against him and said he has proven his ability to lead the line at Leverkusen.

"What I was missing in the last two or three years, it was like I was playing sometimes and then returning to the bench," Hernandez told the Orlando Sentinel.

"But now that I am playing most of the game or almost all of my games here in my club, that's what I need.

"Because people sometimes think the confidence is with goals, but I don't think like that. I think confidence is to play day-by-day, to get rhythm."