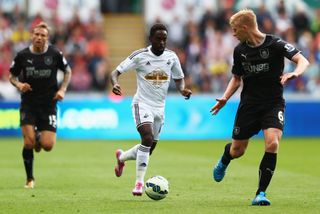 Dyer struck midway through the first half at the Liberty Stadium to maintain Swansea's perfect start to the Premier League season.

Monk has strengthened his side during the close-season but he was most impressed by Dyer, one of the longest-serving players in his squad.

The 26-year-old has been in South Wales since 2008 and his consistent willingness to improve is something that Monk believes sets him apart from other players.

"Nath's a great guy," said Monk. "He's a real good worker, he listens and he wants to improve.

"We want to try and work with him in that way, but you also have to make sure that they've got the freedom to express themselves.

"You don't just give them a structure and that's it, you have make sure they have that freedom which I think we've pretty much got with Nath.

"The inconsistency side is the same as every player, but more so with wingers because they're very much in and out of games.

"I knew Nath when he signed. I knew him from Southampton and the quality that he had and what he possessed.

"I always thought that if we got to this level Nathan would do well and he's done that.

"To play that many games in the Premiership, there's a reason why he's done that and done so well in those games.

"You can get better all the time and there'll be inconsistent performances within them, but the majority he's done for us have been very good performances."

Dyer enjoyed his most prolific league campaign for Swansea last season with six goals as they finished 12th in the Premier League.