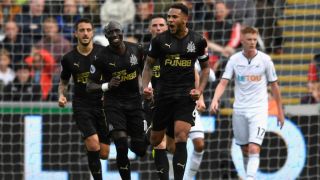 Renato Sanches endured a frustrating Premier League debut as a toothless Swansea City were beaten 1-0 at home by Newcastle United on Sunday.

Magpies skipper Jamaal Lascelles - who had earlier produced an exceptional goal-line clearance to deny Tammy Abraham - headed the winner from Matt Ritchie's 76th-minute corner to end Newcastle's run of 12 matches without a Premier League away win.

The visitors had created the best of the opportunities up to that point as only Lukasz Fabianski's stunning first-half denial of Joselu prevented them from taking an earlier lead.

A surprise deadline-day loan signing from Bayern Munich, Sanches struggled to gel with his new team-mates and was withdrawn after 69 minutes.

Paul Clement introduced returning striker Wilfried Bony in his place but the fan favourite could do little about Lascelles' thumping winner, the captain getting above Alfie Mawson to leave Fabianski with no chance.

Newcastle's deserved victory came despite the absence of boss Rafael Benitez, who missed the match as he recovers from hernia surgery.

Jamaal Lascelles rises highest to head his third goal for and hand his side a lead late on... September 10, 2017

A high-tempo start saw the first chance fall to an unlikely source in Isaac Hayden, the Newcastle midfielder sweeping a loose ball straight at Fabianski before earning a yellow card for a heavy challenge on Sanches.

Swansea's new-look midfield enjoyed plenty of early possession but it was the visitors who continued to threaten the most with Jacob Murphy blazing over from a long ball forward.

And Joselu looked certain to give Newcastle a deserved lead just after the half-hour, only for Fabianski to acrobatically push the Spaniard's well-directed header around the post.

Rob Elliot matched that save at the other end by turning Jordan Ayew's effort wide, before Mawson nodded the resultant corner past the upright as the action intensified.

An irritated Sanches escaped punishment for a kick on Joselu late in the half as Hayden again tested Fabianski to close out a promising first 45 minutes from the away side.

Swansea began the second half in livelier fashion with Elliot required to block a smart near-post volley from Tom Carroll.

Abraham should have made the pressure pay when he raced onto Leroy Fer's through ball and rounded Elliot, but Lascelles recovered to slide in and divert the forward's effort away from an empty net.

Clement responded by withdrawing Sanches for Bony with 20 minutes remaining, although it was Ayoze Perez who spurned a clear chance when he fired into Fabianski's legs soon afterwards.

Instead, it was left to Lascelles to get free at a corner and head the Magpies to their second straight win of an improving league campaign.

3 - All three of Jamaal Lascelles goals for Newcastle in the Premier League have been headers via a corner - two coming vs Swansea. Nod.September 10, 2017

Benitez's side can make it three in a row when they host Stoke City next weekend, while Swansea face a tough trip to Tottenham.