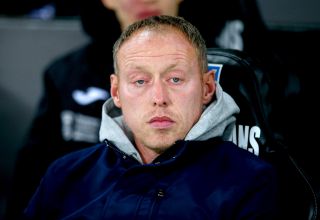 Swansea boss Steve Cooper has warned about the dangers of sitting on a lead ahead of their play-off return at Brentford.

Andre Ayew’s brilliant first-leg strike secured the Swans a slender 1-0 advantage heading into Wednesday’s semi-final rematch at Griffin Park – the final competitive game to be played at the 116-year-old stadium.

But former England youth boss Cooper has no intention of playing for a draw as he attempts to end his first season of management in senior football by steering Swansea to the Sky Bet Championship play-off final at Wembley.

“Of course a draw would be good, but we won’t be playing for it. I don’t know how you do that. It’s not in our mentality to sit back.

“At times you have to manage games and sit back and see things out.

“That’s part and parcel of football and getting over the line, but that’s not the way we want to go.”

Sixth-placed Swansea finished three places and 11 points below Brentford in the Championship standings after 46 games.

But the form guide is in Swansea’s favour after a dramatic end to the season saw them claim the final play-off spot and Brentford miss out on automatic promotion.

“Brentford are obviously a good team and you can’t take anything for granted,” Cooper said.

“But we’re focusing on ourselves rather than who we come up against, and we’re in a really good place playing exciting football.

“I said before we’re the afterthought of the four teams, but we’re OK with that and believe in what we’re doing.”

Cooper says Swansea have been practising penalties in training, with the possibility of a spot-kick contest deciding the winner at Griffin Park.

Ayew had a penalty saved in the first leg before scoring the winner but the Ghana striker – who might have left Swansea last summer after a season on loan at Turkish club Fenerbahce – will step up should the visitors get a penalty in west London.

“He’s our big player. He’s played in World Cups and the Champions League and he’s in complete control of what he does.

“I thought he was as good as anybody on the pitch anyway before it (penalty miss) and he stepped up even more after it.

“He came in late last summer because of the Africa Cup of Nations but we hit it off straight away and he’s been brilliant.

“We’ve never had a conversation about him going elsewhere. I’m sure he had opportunities and offers, but I’ve never had to persuade him to stay.

“He’s never behaved like he wanted to go, the opposite in fact. It’s been great to see a guy with his experience and ability operate as he has.”