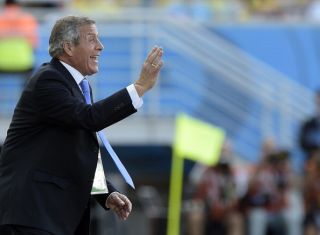 Uruguay coach Oscar Tabarez expects his side to grow as the Copa America progresses after a narrow 1-0 win over Jamaica.

Tabarez's defending champions edged their Group B opener in Antofagasta on Saturday thanks to Cristian Rodríguez's second-half strike, and Tabarez accepted his team were well below their best.

"We were not quite there in terms of our delivery, without speaking about particular players," the Uruguay coach told reporters after the match.

"But really, no team ever turns up for the first game in perfect condition, and for that reason I hope that we will improve as the tournament goes on."

Uruguay next face Argentina on Tuesday, and Tabarez added that the remainder of the Copa America will also have an impact on his thinking ahead of the 2018 World Cup qualifying competition when it begins in October.

"You cannot draw conclusions on a match-by-match basis, but we need to improve quickly for the Copa. There are things that will be considered both for this competition and for the World Cup qualifiers," he added.

After meeting Argentina, Uruguay will complete their Group B schedule against Paraguay on June 20.