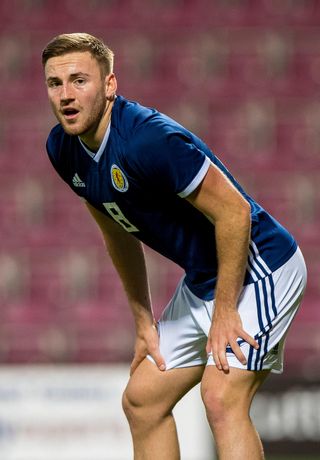 Richard Tait has questioned whether Gordon Strachan has seen Motherwell’s young contingent this season after the former Scotland manager claimed clubs were deluding themselves about the talent coming through.

Strachan offered his perspective amid the fall-out from Scotland’s 3-0 defeat in Kazakhstan and claimed clubs were more to blame for the national team’s struggles than the manager or Scottish Football Association.

But Tait is adamant Motherwell are doing their bit to help the future of Scottish football.

Motherwell had four players starting for Scotland Under-21s last week – first-team midfielders David Turnbull, Allan Campbell and Jake Hastie and defender Barry Maguire, who has been tipped to make his breakthrough next season after a loan spell at Queen of the South.

Tait said of Strachan’s comments: “Has he been to a Motherwell game? I don’t know, he obviously hasn’t if he’s not seen the talent we have got coming through.

“Everyone has got an opinion but I think people’s opinions sometimes are probably biased to what they have actually seen.

“I doubt he has been to a Motherwell game and seen the lads, so I don’t know how he can comment on that.

“It’s fantastic that they are all starting for Scotland. It’s positive for Motherwell but it’s also positive for the future of Scotland as well.

“I think they have a bright future ahead of them if they keep doing what they are doing.

“I think everyone expects to bring through players like Lionel Messi all the time. That’s a load of rubbish, the guy is a one-in-a-lifetime kind of player.

“David Turnbull is a fantastic football player, Jake Hastie, Allan Campbell, Barry Maguire is out on loan but he is great football player as well. And it’s just nice Motherwell have that much young talent coming through the squad.”

Tait has been backed for a Scotland call-up after consistent displays on either side of the Motherwell defence.

Right-back has been up for grabs in the Scotland set-up since Alan Hutton quit but the 29-year-old has mainly played left wing-back this season and last.

Tait said: “I don’t really dwell on it or think about it. It would be a great honour if it ever happened.

“But other than that I am more focused on Motherwell and trying to get into the top six.”

Motherwell realistically need to beat St Johnstone on Saturday to have any chance of doing that. The Perth side leapfrogged them in midweek but both are chasing Hibernian.

Tait said: “We need to win to keep the chances alive. It’s a shame we have to rely on other results, but it’s just like any other game, we want to go and win it.”