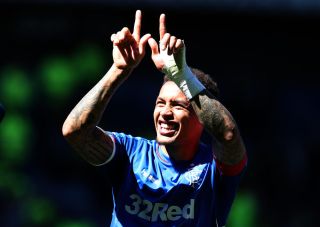 James Tavernier insists Rangers will be title challengers next year if they cut out the costly mistakes which wrecked this year’s bid.

The Ibrox skipper and his side set down a marker ahead of the next season with a 2-0 victory in the final Old Firm clash of the season.

Tavernier’s second-minute free-kick was misjudged by Celtic keeper Scott Bain as it was allowed to drift in at the back post and Scott Arfield wrapped up the win midway through the second period.

With Neil Lennon’s side already confirmed as champions, the victory counts for little in the larger scheme of things but will renew belief among the blue half of Glasgow that they can finally halt their bitter rivals’ era of domination after the summer.

And their captain is confident his side will be in the hunt for longer next term.

“We have to take this performance into the new season,” he said. “Over the past five games we have shown a real dominance in the way we have played and in the system we have worked on.

“We definitely believe we need to carry that into next season but today we were exceptional.

“Yeah, we’ll be frustrated looking back on parts of this campaign. Once the season ends, it is those other games where we have lacked consistency.

“If we learn from those lessons before next season then we will definitely be in a title race.

“There are positives there. So if we can take them, and look at and correct the negatives, then I believe we will be in a really good position.

“We have gone toe-to-toe with Celtic, who have obviously deserved to win the league. That is down to us with our lack of consistency. But we feel that we have got the team and the manager is going to strengthen in the summer. We are in a good position.”

And Hoops skipper Scot Brown insists they should have had another when he found himself falling to the ground after Jon Flanagan thrust his arm into his face early in the second half.

Brown – who saw Alfredo Morelos sent off and Ryan Kent punished retrospectively the last time the sides met in March after clashes – said: “Yeah, another one to the face. Surprisingly, somebody didn’t see that again.

“(Clancy) said it wasn’t a yellow because it didn’t hit me in the face. But it’s part and parcel.

“I don’t think it would have changed the outcome of the game. We didn’t deserve to win today, Rangers played better than we did.”

Lennon claimed Rangers were hungrier than his team but Brown believes his side will respond as they look to wrap up the triple treble against Hearts in the William Hill Scottish Cup final.

“We didn’t compete, we didn’t press as well as we could have done,” he said. “But for us, now, it’s about how we look forward.

“We’ve got a league title, we’re going to hopefully win a Treble – and that hopefully puts a lot of smiles on a lot of fans’ faces.

“It’s our first defeat since here last time. So you look at the season we’ve had, it’s been fantastic.

“The season isn’t based on one fixture. It’s based on how well we’ve played all season.

“We’ve dominated the league for the last eight years. We need to make sure we continue to do that in the Cup final – and next season as well.”