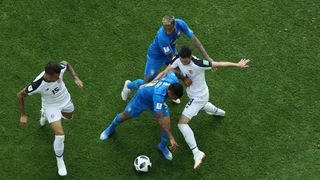 Neymar might have finished Brazil's 2-0 win over Costa Rica in floods of tears but international team-mate Gabriel Jesus believes he brings happiness to the world.

The World Cup favourites were on course for a second consecutive draw in Group E before a dramatic period of stoppage time in St Petersburg.

Philippe Coutinho - the game's outstanding player - pounced on hold-up play from Jesus to break the deadlock in the 91st minute, with Neymar making sure of the points from Douglas Costa's centre.

In the intervening period, Neymar also audaciously completed a rainbow flick over the head of Costa Rica substitute Yeltsin Tejeda and fell to his knees in emotional scenes at the final whistle.

The Paris Saint-Germain forward subsequently explained in an Instagram post that they were tears of joy following his intensive recovery from a broken foot suffered in February and Jesus believes his sometimes-polarising team-mate should be treasured.

"He emanates happiness to all of us, to [the team] and to Brazil. Not only because of his football but because of him as a person.

"We have to treasure our idols. To treasure and believe in them until the last minute."

While Neymar's rehabilitation was fast-tracked in order for him to play a full part in Brazil's World Cup campaign, Jesus does not have similar guarantees over his starting position at centre forward.

Liverpool's Roberto Firmino presents an attractive alternative in the number nine position for the final round-robin match against Serbia.

Jesus had a goal ruled out for offside and hit the crossbar before his crucial role in Coutinho's goal but is yet to get off the mark himself in Russia.

Firmino was also on the field at the end as Brazil chased victory and the Manchester City striker feels comparisons between the pair are inevitable.

"That's normal that two players with chances of playing in the national team face comparisons," he added.

"It's [head coach] Tite's decision on who is better at the moment to get on the pitch. But Firmino has all conditions to be among the first 11 as well as I have.

"He can be the main forward player. I hope that, no matter if he plays or if I play, we can play well."