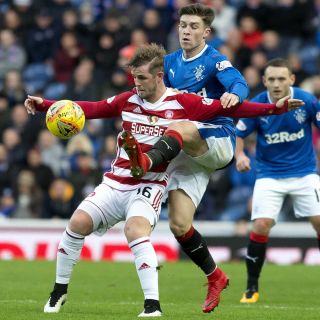 David Templeton is relishing the expectation that will no doubt come with his return to Hamilton.

The former Rangers forward, 31, returned to the Lanarkshire club at the end of January from an 18-month spell at English League One side Burton and came on in the second half of Sunday’s 4-1 defeat by Celtic which left Brian Rice’s side bottom of the table.

Ahead of Wednesday night’s visit to St Mirren, Templeton spoke about the predicament he again finds himself in in Scotland.

He said: “The last time I was here we were in the same situation.

“Obviously there is a lot of different lads now but it seems everyone is up for the fight and come Wednesday it is a massive game for us so hopefully we can start picking up points and get ourselves up the table to safety.

“There probably is (expectation) but I don’t mind that.

“It is something that you either thrive on or crumble, basically. I am hoping I can thrive off it and do well.

“Hopefully I don’t let the fans down and tarnish what happened the last time.

“Hopefully I can do well and the most important thing is to help the club stay safe and pick up points.”

Hamilton boss Rice is excited about having Templeton at his disposal.

He said: “David Templeton will do things on the pitch that other players can’t do or can’t see.

“A lot of the games have been one-goal margins, mostly against us. I am hoping David can maybe swing it our way.

“He has all the ability in the world, he loves it here, he is happy to be back up the road with his wife and new baby so I am hoping we can get the best out of David Templeton in the run-in.”