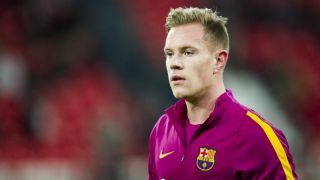 However, goals from Luis Suarez, Gerard Pique and Neymar ensured Luis Enrique's side advanced to the last four.

"Athletic are very difficult rivals for us because they create so much pressure when we're bringing out the ball," goalkeeper Ter Stegen told the club's official website.

"In the second half we were better. We found more space and our strikers took advantage."

Ter Stegen expects a difficult semi-final encounter, and is also looking forward to Saturday's top-of-the-table La Liga clash with Atletico Madrid - who were surprisingly eliminated from the Copa on Wednesday by Celta Vigo.

"All the teams that are still in the Copa are great teams and I am sure we will have a very tough opponent in the semi-finals," the German added.

"We now need to rest and recover to get in good condition for the match against Atletico Madrid."