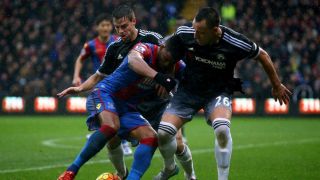 The first victory of Hiddink's second spell in charge arrived in emphatic fashion, with Oscar and Diego Costa on target either side of a spectacular long-range strike from Willian.

Terry continued to show remorse over the dreadful run of form that saw the club part company with Jose Mourinho last month, but stated the qualities that helped Hiddink to stage a mid-season rescue act in 2009 remain firmly in place.

"He's been great since he's come in," the former England skipper told Sky Sports. "It's unfortunate what's happened, we've let everyone down.

"But the new man has come in, like he did last time, picked everyone up and you can see we've gone again.

"That [level of performance] has always been there. It's unfortunate it wasn't earlier in the season but we are where we are – and slowly climbing this league table.

"Guus has picked things up, picked players up and we've had to go again. We've known as a group we have to get better and we have done, slowly but surely. We hope that today isn't the last of it."

Costa and Cesc Fabregas – towering influences over Chelsea's title march last season but more often than not lacklustre performers this time around – starred throughout at Selhurst Park and Terry feels the rediscovery of such vintage form was long overdue.

"I think it was the Chelsea of last season," he said. "The football was first class. We kept the football in tough conditions – it was rainy and windy, with a lot of zip on the surface.

"Overall, as well as the goals, we were a different class.

"I'm not sure [why we were more fluent] – new year, new start? We have to keep winning games. We've had couple of draws of late and have been unlucky not to pick up more points.

"We're delighted with three points,  it feels good and that's a feeling we want."