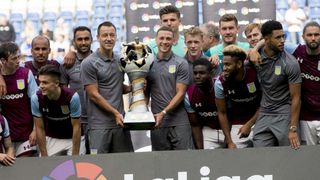 John Terry is no stranger to silverware, but it is unlikely he has ever had his hands on a trophy as weird as the Cup of Traditions.

But the best was yet to come as the defender and his team-mates lifted one a highly peculiar trophy, which features a player bursting his way out of a giant football.

It might look like something out of the film 'Alien', but Terry and Villa are up and running ahead of the new Championship season. He wasn't wearing his full kit, though...