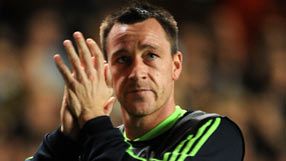 The 54-year-old, who made 179 appearances for the Blues before joining Manchester United in 1979, was appointed assistant coach at Chelsea under Luiz Felipe Scolari and remained following the Brazilian's departure, briefly taking charge of the team prior to Guus Hiddink's arrival as temporary coach in 2009.

The Premier League champions, without influential quartet Terry, Alex, Frank Lampard and Michael Essien, suffered a shock 3-0 home defeat to Sunderland on Sunday in the first game since Wilkins' exit.

And the Blues' skipper was quick to hail the impact Wilkins had on the Stamford Bridge side.

"Ray has left the club and everyone is sad to see him go," Terry said in The Guardian. "It was an unexpected decision but we have to move on and stay calm. Ray's been brilliant since he came in, from day one, not only as a coach but as a man as well.

"He was a great person to have around the football club, he would pick you up when you were down and, if there was a problem for any players or staff, he would be the first one to call them to make sure everything was OK and to ask if there was any way he could help. All that came alongside his knowledge and coaching ability on the football field."

Goalkeeper Petr Cech conceded a first league goal at Stamford Bridge since John Carew scored against him for Aston Villa in March, but he insisted that Wilkins' departure had no effect on the players' performance, as Chelsea suffered their biggest home defeat since a 3-0 reverse to Manchester United back in April 2002.

"There are things that happen in football everyday," said Cech. "Managers come and go, and first-team coaches and players can leave suddenly. So we are all used to things like that. But it's not an excuse. It was just that our performance wasn't up to standard. We didn't play well as a team.