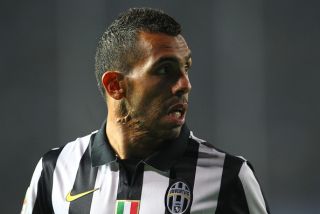 Despite dominating on the domestic front, securing three consecutive Serie A titles, Juve have not won the UEFA Champions League since 1996, and they slipped to a second straight Group A defeat at the hands of Olympiacos on Wednesday.

The 1-0 result owed much to the performance of Olympiacos goalkeeper Roberto, who kept the visitors at bay following Pajtim Kasami's 36th-minute opener, and it means the Greek club climb to second at Juve's expense.

"Roberto put in an incredible performance and Olympiacos can thank him for the victory," Tevez told Sport Mediaset.

"We have to turn over a new leaf and find something within ourselves. We must remember that we are Juventus. We certainly didn't come here to lose.

"The history of Juventus has always been a bit like this, they do well in Serie A and struggle in Europe. If we want to become a great team then we have to turn that around and I believe we can change it.

"I think it is an issue of mentality and it depends only on us to change."

Juventus now face an uphill task to progress to the next round, three points behind Olympiacos and Atletico Madrid on six, with the return fixture against Olympiacos to come next.

Goalkeeper and captain Gianluigi Buffon feels the outcome of Wednesday's match could have been different, had his side played to their usual level in the first half, but now admits they will struggle to advance.

Buffon told UEFA's official website: "We played a great second half creating a lot of chances, while we were just a normal team before the break.

"Probably we would have needed the same intensity for the whole game. Now our European path is complicated."