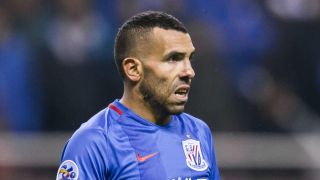 Shanghai Shenhua have terminated the contract of striker Carlos Tevez.

The 33-year-old had another 12 months to run on his deal with the Chinese Super League side but the club have opted to release him following weeks of speculation over his future.

"The club would like to place on record our gratitude to Tevez for his contribution last season and wish him all the best in his future endeavours," they confirmed in a statement.

Tevez is now expected to return to boyhood club Boca Juniors, having been pictured in the club's gym on Friday.

Boca tweeted the image of a smiling Tevez on a treadmill, with the caption: "Tevez is coming home! He joined the team today and is already training with his team-mates."

Tevez reportedly became the world's best-paid player when he signed a two-year deal with Shenhua in December 2016 worth a reported £615,000 a week.

The former Manchester United forward endured a miserable time in China, though, scoring just four goals in 16 CSL appearances amid accusations of a poor work ethic.

He was left out of the squad for the Chinese FA Cup final and later returned to Argentina for treatment on a calf injury.