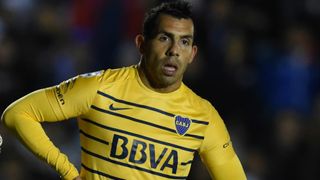 Carlos Tevez will link up with former club Corinthians after rejecting big-money offers from the Premier League, LaLiga and Serie A.

Tevez is set to depart Boca Juniors following one year at the club, just days after the Argentine giants were knocked out of the Copa Libertadores semi-finals.

The 32-year-old had rejected a huge offer from West Ham, while he also turned down another one of his former clubs in Juventus, as well as Champions League finalists Atletico Madrid.

"The move [to Corinthians] is practically done, as the only thing missing is the signature on the contract," said Tevez's advisor Kia Joorabchian.

"Atletico Madrid, two clubs from the Premier League and Juventus have all tried to sign him, but Tevez wanted to go to Brazil and to Corinthians."

It will be Tevez's second spell for Corinthians, after joining the Brazilian outfit from Boca Juniors in 2005.

The Argentinian was the club's top goalscorer as they went on to win the Campeonato Brasileiro Serie A, before being signed by West Ham in 2006.