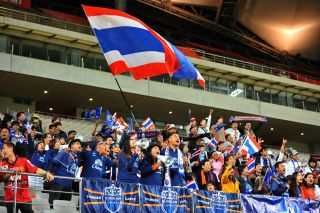 Buriram's success – coupled with the fact that the second-placed Muang Thong United drew 2-2 at BEC Tero Sasana – sees them lead the league by five points with just one match remaining.

After a goalless first half, Jirawat Makkharom fired Buriram in front in the 49th minute, before Osmar sealed the result with four minutes to play.

The title is Buriram's third in the last six years, with Alejandro Menendez's side having won 22 of their 31 matches this season.

They have also remained unbeaten and will be hopeful of avoiding defeat against TOT next week to complete their campaign.

Muang Thong took the lead through Teerasil Dangda, but looked to be heading for defeat when goals from Wichaya Dechmitr and Chanathip Songkrasin put BEC in the lead.

Mario Gjurovsk equalised for Rene Desaeyere's men, but they failed to fashion a winner and will finish the season as runners-up.

Pattaya United are almost certain to be relegated after suffering a 1-0 home defeat to Chiangrai United, with Anon Sangsranoi scoring the winner from the penalty spot.

Pattaya are three points behind Samut Songkhram, Songkhla United and Ratchaburi ahead of the final weekend of the season, and have a poor goal difference.

Leandro Assuncao scored twice as Samut were beaten 4-0 at Chonburi, while Juninho scored the only goal of the game as TOT beat Songkhla.

Douglas Gardozo was Ratchaburi's hero as he scored the only goal from the penalty spot against Police United.