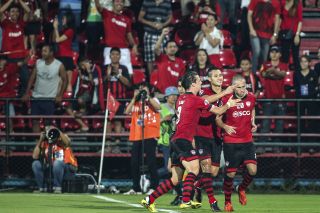 Mario Gjurovski's goal after 35 minutes gave Rene Desaeyere's men all three points to ensure the gap between themselves and leaders Buriram United remains at three points.

With two games remaining for Buriram and Muang Thong, Alejandro Menendez's side can still be caught, but they gave their title hopes a boost with a comprehensive 5-0 victory over Pattaya United.

A win for Buriram next week against Bangkok United would all but secure the leaders the silverware, regardless of Muang Thong's result versus BEC Tero Sasana, given the 19-goal gulf in goal difference.

At the bottom, Chiangrai United climbed out of the drop zone with a 1-0 win over fellow strugglers Ratchaburi. A 13th-minute Leonardo goal moved his side up to 14th, with Pattaya now bottom of the table.

Chonburi had already seen their hopes of threatening the league's summit evaporate prior to their 3-1 defeat against Police United, which saw them concede three goals in the opening 38 minutes before Pipop On-Mo scored a consolation a minute from time.

Osotspa's winless run in the league was extended to four games after going down 4-2 to BEC Tero Sasana, despite having led twice in the game, while Sumanya Purisai's hat-trick gave Chainat a 3-0 win over Suphanburi after Suchon Sa-Nguandee was dismissed four minutes after the hour mark for the visitors.

Mongkon Totsagrai's goal cancelled out Poowanat Saengsree's opener to deny Songkhram at the death, although the point does move them up a place to 12th.