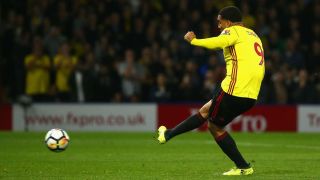 Troy Deeney accused Arsenal of showing a lack of fight after they let slip a one-goal lead to lose 2-1 at Premier League rivals Watford on Saturday.

The visitors appeared on course to make it five wins in a row in all competitions thanks to Per Mertesacker's first-half goal - only to concede twice in a dramatic final 20 minutes at Vicarage Road.

Deeney equalised from the spot after Hector Bellerin was adjudged to have fouled Richarlison inside the area, a decision Arsene Wenger branded "scandalous" in his post-match interview.

However, Deeney - who also had a hand in his side's winner, challenging goalkeeper Petr Cech for a loose ball that eventually broke into the path of scorer Tom Cleverley - insisted Arsenal's failure to hang on had nothing to do with referee Neil Swarbrick's penalty call.

"Well, I'm not one to tell Mr Wenger about himself, but the reason they lost wasn't due to one penalty.

"Having a bit of cojones, I think the word is. Whenever I play against Arsenal – and this is just a personal thing – I go up and think 'let me whack the first one, then we will see who wants it'.

"I came on today and jumped up with Mertesacker – I didn't even have to jump up actually – nodded it down and the crowd gets up. They all just backed off.

"For me, as a player, I just think happy days. That's my strength, so if you're going to let me do that against you, you're in for a tough afternoon.

"That's the equaliser for me. I know I'm not as technically gifted as they are. But if you want a fight with me, I'll beat you all day."