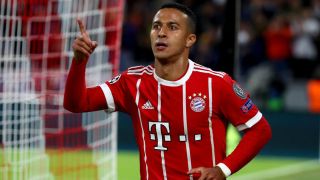 Thiago Alcantara could return against Freiburg on Saturday after Bayern Munich confirmed he has not suffered a major ankle injury.

The 26-year-old will sit out Spain's final World Cup qualifier against Israel on Monday after an MRI scan showed he had picked up a problem following the 3-0 win over Albania last week, in which he scored his side's third goal.

Subsequent tests have identified a strain to his ankle ligaments but Bayern expect him to miss only a handful of training sessions and hope he will be available when their Bundesliga title defence resumes this weekend.

"Thiago has strained an interior ligament in his ankle and must only take a short break from training," the club said in a statement.

"The 26-year-old will in all probability be back for the home game against Freiburg."

It will be the first game in charge for Jupp Heynckes, who has been appointed for a fourth spell as head coach until the end of the season following the dismissal of Carlo Ancelotti.