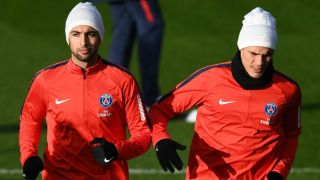 Paris Saint-Germain captain Thiago Silva said the absence of Edinson Cavani and Javier Pastore has not been good for the French giants as their exile continued on Wednesday.

Cavani and Pastore were not in the squad as Paris Saint-Germain reached the Coupe de la Ligue semi-finals courtesy of a 2-0 win over 10-man Amiens midweek after their late return from a mid-season break.

The pair were also overlooked for Sunday's 6-1 rout of Rennes in the Coupe de France, having failed to report to training on time.

Silva acknowledged the situation post-match, while he talked up the importance of PSG's leading scorer Cavani.

"They will come back, the coach and the club will give them the opportunity to come back," Brazilian defender Silva said.

"This is a very important moment for the club, we must stay together, even if they made a gesture that was not good for the group and the club.

"It is important to come back as soon as possible. It was an important moment for the club, we must think before making gestures like that, it's not good for everyone.

"There is a difference between Pastore and Cavani. Pastore I think he told the club that he wanted to leave, in the end they did not find an agreement. Cavani, it's a little different. It's important for the club that he comes back as soon as possible."

Neymar and Adrien Rabiot were both on target away from home as PSG earned a final-four meeting with Rennes, while Ligue 1 champions Monaco will face Montpellier for a spot in the decider.