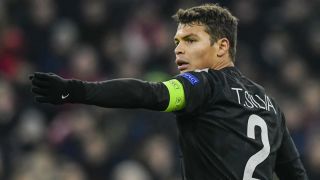 Paris Saint-Germain captain Thiago Silva insists there is no bad blood with team-mate Javier Pastore following recent comments on his omission from the first team.

Pastore and Edinson Cavani were disciplined by the club for returning late to training following the mid-season break, with head coach Unai Emery leaving them out of cup matches against Amiens and Rennes.

Silva said the duo's absence was "not good" for PSG and claimed he believed Pastore had told the club he wanted to leave during the transfer window, prompting an angry denial from the midfielder on social media.

The Brazil centre-back says he spoke to Pastore the next day to settle the argument and has hit out at sections of the media for their scrutiny of the issue.

"Sometimes things happen, especially in interviews, that people take to be controversial," he told Radio Globo. "People don't talk about the football we're playing or our matches. The questions are always related to the controversy.

"This is really exaggerated and it makes us very sad. And that ends up getting into the dressing room.

"Recently, I gave an interview that Pastore didn't like. The next day, I sent him a message and we talked in the dressing room in the best way possible and it was completely resolved."

PSG head to Guingamp on Wednesday for their Coupe de France round-of-32 clash.