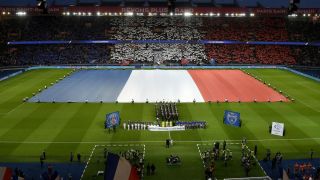 Multiple terrorist strikes across Paris on November 13, including suicide bombers targeting the international friendly between France and Germany at the Stade de France, left 130 people dead.

Speaking to Omnisport, Brazil star Thiago SIlva explained that the aftermath of the atrocities were difficult for team-mates such as Blaise Matuidi – who played against Germany – and those like himself who were far away on international duty at the time.

"It was difficult for everybody," he said. "Especially because many players were on international duty.

"Many players were at Stade de France and were playing there. Blaise told me that it was a nightmare scenario.

"A lot of negative things happened but we tried to stay calm and give our support to the families who had lost someone.

"After that, even if we were playing for our countries, Pocho [Ezequiel Lavezzi], [Angel] Di Maria, David Luiz, they were scared to come back here and be in this difficult situation.

"What happened is unreal. But we always try to give our best, for everybody, especially when we play at Parc des Princes, there is always a fantastic atmosphere.

"We try to give our best on the pitch to give joy to everybody."