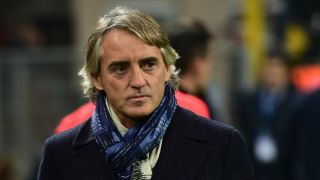 Mancini, 51, has received plenty of criticism this season due to Inter's conservative style of play, but results initially proved the coach right, as the team climbed to the top of the Serie A standings.

However, they have now lost three of their last six league outings and have dropped to third place in the table.

"He [Mancini] is a good coach and he will remain in charge next season," Thohir was quoted as saying by La Gazzetta dello Sport.

"Our goal remains qualifying for the Champions League.

"It is just the media and fans who are talking about the Scudetto. I don't think we should panic."

Inter were upset by Sassuolo at the weekend, losing 1-0 following a late Domenico Berardi penalty, and Thohir has demanded a response against Atalanta on Saturday.

"Sunday's match left us speechless, but this is football.

"We attacked constantly but the ball refused to go into the net.

"I hope Mancini and the players respond immediately against Atalanta."