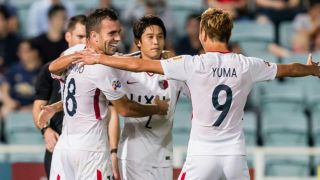 Kashima Antlers cruised into the semi-finals of the AFC Champions League as a 3-0 win at Tianjin Quanjian secured a 5-0 aggregate thumping.

The J.League side prevailed 2-0 on home soil late last month and when Serginho, who netted the second in that victory, scored the opener in Tuesday's return leg in the 13th minute, the tie was as good as over.

With any hope the home fans had of staging a comeback seemingly sucked out of the Macau Olympic Stadium, Kashima capitalised on the misery and doubled their lead in the 27th minute, Hiroki Abe sweeping home Atsuto Uchida's cut-back with the aid of a deflection.

Former Brazil international Alexandre Pato was anonymous for Paulo Sousa's side, whose torrid outing was complete midway through the second half as substitute Shoma Doi exchanged passes with Serginho and fired into the top-left corner.

Tianjin replacement Zheng Dalun did rattle the upright a minute from time but that was of little consequence to Kashima, who join Al Sadd and Persepolis in taking their place in the last four of the competition.

Congratulations to for making it to the semi-finals!  September 18, 2018

After a 3-1 first-leg win at Esteghlal, Xavi's Al Sadd advanced 5-3 on aggregate following a 2-2 draw in Doha on Monday, Baghdad Bounedjah scoring one and assisting the other.

Persepolis, meanwhile, overturned a 1-0 first-leg deficit to defeat Al Duhail 3-1 in Tehran. The semi-final line-up will be completed on Wednesday, with Suwon Bluewings defending a 3-0 lead at home to 2016 winners Jeonbuk Motors.