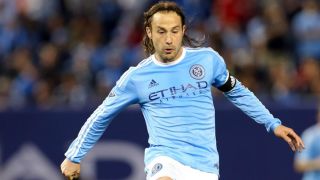 The Portland Timbers have added a couple complementary pieces to their MLS Cup-winning squad, announcing the acquisitions of midfielder Ned Grabavoy and defender Zarek Valentin on Tuesday.

Grabavoy, 32, joins Portland as a free agent after spending the 2015 campaign with New York City FC, notching two goals and three assists in 26 games (22 starts). The veteran, who can play wide and central midfield roles, had spent the previous six seasons with Real Salt Lake, for whom he appeared in two MLS Cup finals and one CONCACAF Champions League final.

"Ned is a great fit for our club. He is a smart and technical player that provides quality proven depth in several attacking roles," Timbers coach Caleb Porter said in a news release. "His MLS and CCL experience will also be key in helping us manage a rigorous schedule involving multiple competitions."

The Timbers acquired the rights of Valentin from the Montreal Impact in exchange for a 2016 international roster slot. The 24-year-old hasn't played in MLS since making 15 appearances for Montreal in 2012, spending the past three years with Norwegian side Bodo/Glimt.

Valentin, who has experience playing center back and right back, played under Porter at the University of Akron from 2009 to 2010.

"We are getting Zarek at an optimum time in his playing career," Porter said. "He cut his teeth in MLS as a promising young defender and now his stint in Norway has matured his game even further. He is capable of playing any position in the back four and I expect him to earn a significant role in our squad."