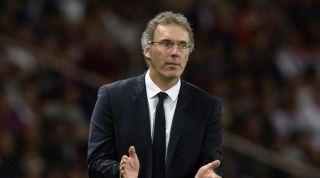 The Ligue 1 champions have invested heavily in their squad over the past three years and reaped the rewards by winning two league titles.

They travel to Amsterdam to face Ajax in the opening round of the group stages on Wednesday on the back of a third successive draw away from home in Ligue 1 and the second that has seen them throw away a goal advantage to drop points.

Blanc knows the Parisian outfit cannot afford to repeat that in the Champions League and urged his side to show that the club can compete with Europe's elite both on and off the pitch.

"I think that Paris Saint-Germain are increasingly recognised in Europe," the coach said at a media conference on Tuesday. "Now we need to prove it on the field and I am sure that on Wednesday it will not be easy.

"This first meeting is important, because it will determine much the rest of the adventure.

"In the Champions League, as the competition progresses, the harder it is to score goals.

"We need to know the score and manage to learn from our last match in Rennes [when they drew 1-1]."

The two sides meet for the very first time in a competitive match at the Amsterdam Arena, with PSG keen to start well given their next opponents are Barcelona.