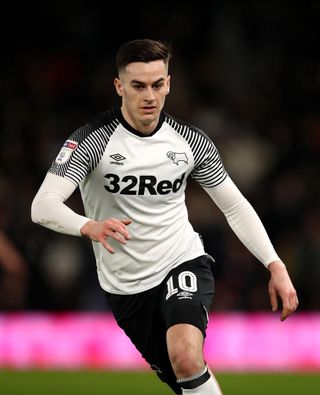 Tom Lawrence scored twice as Derby won 3-1 at Sheffield Wednesday to end a run of four games without a victory.

All three Derby goals were scored inside the opening 30 minutes, while a strike from substitute Josh Windass in the second half reduced the arrears but the hosts never seriously threatened to stage a comeback.

After scoring a stoppage-time winner as a substitute in midweek against Charlton, Wednesday striker Steven Fletcher was handed his first start since mid-December.

The visitors took a seventh-minute lead when Lawrence’s shot deflected off Tom Lees and wrong-footed Cameron Dawson, with the ball going into the left-hand corner of the keeper’s net.

Lawrence went close to putting Derby further ahead when he was through on goal following a good passing move but Dawson made an important save, diverting his shot wide.

Lawrence did make it 2-0 to the Rams in the 24th minute, receiving the ball from Martin inside the area and firing in a low shot which Dawson got a hand to but could not keep out.

Knight put the visitors further ahead on the half-hour mark with a low, angled shot from the right-hand side of the area, with Martin again the provider.

Towards the end of the half, Wednesday boss Garry Monk made a substitution, sending on striker Connor Wickham in place of Kadeem Harris.

A slip from Lees gave Martyn Waghorn an opening just before the break but the Wednesday captain recovered to make an important block.

Monk made a double substitution before the second half began, with Windass and Dominic Iorfa taking over from Fletcher and Lees.

Forsyth went close to scoring an own goal when he cut out a low cross from Morgan Fox, with the ball flashing narrowly wide of the near post.

Wickham then pulled the ball back to Jacob Murphy who shot off-target.

As Martin threatened to burst through the middle, Julian Borner did well to get back and dispossess him.

Kieran Lee found some space inside the area and tried to flick the ball over Ben Hamer but the keeper was able to turn it away for a corner.

Windass pulled a goal back in the 74th minute, getting on the end of a low cross from Murphy to turn the ball in from close range.

With an FA Cup tie against Manchester United to prepare for next week, Derby appeared content to see the game out and rarely ventured forward in the second half.