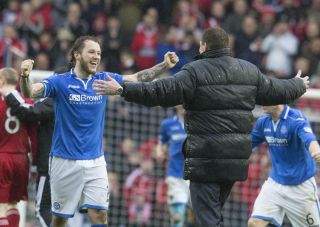 St Johnstone boss Tommy Wright insists Stevie May has nothing to prove on his return to former club Aberdeen on Saturday.

The 26-year-old striker started his career at McDiarmid Park and returned to Perth for a second spell in August after two seasons with Derek McInnes’ Dons, who had bought him from Preston in the summer of 2017.

Ahead of the visit to Pittodrie in the Ladbrokes Premiership, Wright told Saints TV: “For me has nothing to prove.

“He was signed by Aberdeen, he was part of a squad which got to cup finals and got to Europe.

“Maybe he didn’t get the goals that Stevie would have liked and Derek would have liked from him but he played in different positions, so Stevie is a top player and someone I don’t feel has to prove anything to anybody.”

May admits there is “an extra wee incentive in it for me” on his return to Pittodrie.

He said: “I don’t think it adds pressure but it certainly makes it a wee bit more exciting and it’ll be good to play against some familiar faces in my former team-mates.

“Hopefully I’ll be involved from the start but that’s the manager’s decision.

“There’s strong competition in the attacking areas but if I’m called upon I’ll be ready to go.

“The club has had some good results in recent years against Aberdeen so there’s no reason why we can’t do well there again this season.

“We have good players and we’re relishing the prospect of getting all three points tomorrow.”

Saints have had a difficult start to the season and are bottom of the table with only two points from four games.

Wright knows it will be no easy task in adding to that tally at Aberdeen as domestic football returns after the international break.

The Northern Irishman said: “When you haven’t played for a while you are always looking to get back playing. It will be a tough game.

“We know what it is like going up to Aberdeen, they are a strong team and have been runner-up a number of years now and always in that top four and in Europe.”