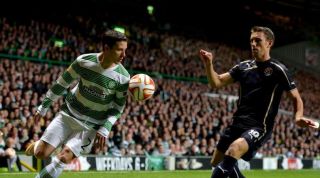 The Aston Villa loanee was found to have used "offensive, insulting and abusive language of a racist nature" towards Logan on his Celtic debut in September.

However, Tonev has always maintained his innocence and opted to appeal the SFA's decision earlier this month.

The 24-year-old, who has been backed by both Celtic and the Bulgarian Football Union, was due to find out on Thursday whether his appeal had been successful.

He will now find out the outcome in the next two weeks, after the SFA confirmed their tribunal had been adjourned to reach a verdict.

"Appellate Tribunal have adjourned Aleksandar Tonev appeal for consideration before reaching a determination within the next two weeks," read a post on the SFA's official Twitter account.