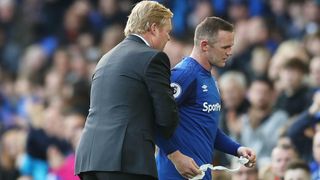 It was supposed to be the year in which Everton challenged the established order for a place in the Champions League, but after just nine matches their season is in ruins and Ronald Koeman has paid the price with his job.

In spite of the seemingly inevitable departure of Romelu Lukaku to Manchester United, there was great optimism around the club throughout pre-season.

A seventh-place finish last term likely had something to do with that, but so did the fact that Koeman was being seriously backed in the transfer market, as Everton spent a reported £142million, the sort of figure their ambition required.

Yet, with the season a little over two months old, Everton find themselves in turmoil, with few of their initially exciting batch of signings justifying their respective price tags.

As Koeman departs with Everton in the relegation zone and bottom of their Europa League group, we examine which of their signings from the last transfer window have failed to impress.

After emerging as one of the Premier League's best young goalkeepers, Everton agreed a £30m deal with Sunderland for Pickford and he has been one few bright points for the Toffees so far this term.

His performance in Sunday's 5-2 defeat to Arsenal – the game which ultimately cost Koeman his job – highlighted how much worse off they would be with a poorer goalkeeper, as he made several crucial saves and still could not prevent a hammering.

Another expensive English signing, Keane joined having already played for England during his time at Burnley, with Manchester United reportedly keen on bringing him back to Old Trafford before Everton swooped.

However, he has really struggled in Everton’s shaky backline, rarely showing the confidence he did regularly at Turf Moor.

The signing of Martina raised a few eyebrows when it was announced, as he arrived on a free transfer having had very little impact in two years at Southampton.

His move has hardly been a calamity considering he did not cost anything, but he has often been identified as a weakness in his fleeting appearances.

Koeman's compatriot arrived with a big reputation after scoring 27 times across his last two league campaigns with Ajax, but he has looked well off the pace so far in England.

Slow, unimposing and generally poor, the £24m signing has had almost no impact in his four Premier League appearances and is looking like a pretty expensive flop.

Signed fairly late on in the transfer window after impressing against Everton in the Europa League for Hajduk Split, Vlasic has certainly shown a few glimpses of talent since joining for around £9.5m.

The Croatia attacking midfielder has ability on the ball, plays with urgency and has an eye for a pass, and looks to be a solid piece of business at the age of 20.

The marquee signing supporters had been demanding for months, Sigurdsson became Everton's club-record signing at £45m after a brilliant season for Swansea City in which he scored nine and set up another 13 in the league.

He was supposed to be the creative spark, the big-name player to lead Everton's charge to the top four, but in eight league matches the Iceland international is yet to score or set up a goal. So far, there can be little doubt that Sigurdsson has been one of their biggest disappointments.

A 14-goal LaLiga haul for Malaga coupled with his inviting release clause of £5.25m made Sandro a target for several top clubs in Spain and England, as Everton snapped him up on a four-year deal.

But, after 11 appearances in all competitions, he is still searching for his first goal. His lack of pace has looked problematic on occasion, as has Everton's stunted creativity. A return to Spain before next season would surprise few.

7 - Everton have scored the same number of Premier League goals this season that former striker Romelu Lukaku on his own (7). Irreplaceable. October 23, 2017

The prodigal son returned in pre-season after 13 years at Manchester United and, while it is easy to forget that he simply is not player he was, Rooney has at least made a relative impact.

Two goals in August – including one in the 1-1 draw at Manchester City – secured half their total of eight points at the time of Koeman's sacking, while his stunner against Arsenal makes him their top scorer on four. He has by no means been electric, but four in nine is not a bad return for a side in the bottom three.