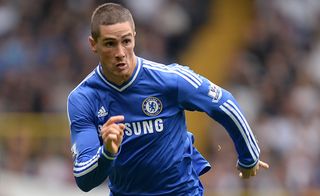 However, the striker is available for the Welsh club's visit to Stamford Bridge, with Mourinho hailing the strength in depth available to him up front.

"I have Fernando, he is ready to play," Mourinho said. "He doesn’t know whether he will play yet – nobody knows.

"I was doing tactical work in training but didn't want to show the players who will play. I mixed the teams up so the players don't know.

"Fernando is ready if selected. He has shown good dedication and good work in this period.

"We have now the three (strikers) available. I want to have problems with players to choose from. Fernando, (Samuel) Eto'o and Demba (Ba) all three are ready and I think we need that."

Mourinho will be without Ashley Cole, who continues to struggle with a rib injury, while Andre Schurrle picked up an knock on international duty with Germany, and is a major doubt.

Ryan Bertrand is set to replace Cole at left back although Mourinho was left frustrated by the international break and the effect on his squad.

When asked about the break, the Portuguese said: "I did not like the period.

"We trained with the kids which for them is good.

"From the team perspective it is bad - you win some matches consecutively and want to play again but they disappear. It is not a good feeling.

"We lost against Everton and Basel immediately after (the last international break) so today we are going to the hotel because I want them to get the feeling of the group and the team.

"Tomorrow is important, we have to try and win."