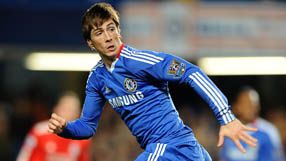 United travel to west London knowing victory will give them a seven-point lead in the Premier League and extinguish Chelsea's slim hopes of retaining the title.

Torres is yet to score for Chelsea since his 50 million- pound deadline day move from Liverpool for whom he often tormented Vidic in a way few other players have managed.

Vidic will have particularly bitter memories of a 4-1 home defeat by Liverpool in 2009 in which Torres hounded him into a first-half mistake to score the equaliser and the Serb was later sent off.

"They have brilliant centre backs and always the motivation is high when you play against them," Torres, who will not have to face the injured Rio Ferdinand, told Chelsea's website.

"You want to play well against these players to show you can do it, and Vidic and Ferdinand were always a big challenge for me. Some people prefer big players not to be playing but I prefer to play against these kinds of players."

Defeat would leave Chelsea 18 points behind United and, significantly, still outside the Champions League places having fallen below Tottenham Hotspur.

However, Torres believes facing United could provide the spark that he and Chelsea have been missing.

"This will be an interesting game because it can make us come back to fight for the title, it is one of the most important games of the season right now," he said.

"If we win this one we are closer to them and we have will still have one more game against them."

Both sides have had distractions leading into the game.

Chelsea's Ashley Cole faces action after accidentally shooting an intern with an air gun and United's Wayne Rooney appeared fortunate to escape FA disciplinary measures after an elbowing incident in the 4-0 win at Wigan Athletic.

Rooney is likely to start alongside Dimitar Berbatov for United while Chelsea manager Carlo Ancelotti must work out how to combine Torres, Didier Drogba and the in-form Nicolas Anelka in attack.