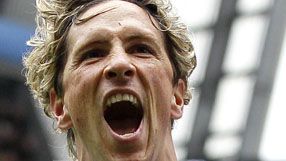 A richly-decorated international career, with European and World Cup winners' medals to his name, the Spanish front-man admits that the Champions league is the one accolade that he dreamed about as a boy.

"It was the only trophy I wanted as a kid, to hold it in my arms, and if we do manage to win it, I’m sure it will be one of the greatest moments of my life," he told Chelsea's official website.

After making his Champions League debut in 2007 for Liverpool against Toulouse, the upcoming clashes with holders Barcelona will be the second time Torres has appeared in a semi-final on European football’s biggest stage.

Coincidentally, it was his current club Chelsea who shattered ‘El Nino’s’ dream, as Liverpool were dumped out of the competition - a result sealed with a goal from his now team-mate Didier Drogba.

It is the Ivorian’s form, in possibly his last season with the Blues, which has seen the former Atletico Madrid man often assigned to either the wing or substitutes' bench.

However, Torres has admitted that he does not mind what role he is asked to carry out under Di Matteo, as long as he starts.

"With the 4-2-3-1 we are quite comfortable, playing well and scoring goals, but for me and all the players, the most important thing is to be in the starting XI," said the Spaniard, who has managed seven goals in all competitions this season.

Paying tribute to the contribution of the Italian, Torres believes that Chelsea’s caretaker boss has found a system that gets the best out of the players at his disposal.

"Roberto has found a system that he knows suits the players well, we have been getting good results as well so obviously there is no need to change it," said the 91-time capped Spanish international.

Chelsea have already reached the FA Cup final as well as battling for a top-four place in the Premier League, with themselves, Arsenal, Tottenham Hotspur and Newcastle United all vying for the two remaining spaces up for grabs.

And Torres has admitted: "It would be a disaster if we weren’t playing in the Champions League next season."

If Chelsea do not manage to win the coveted trophy this season or fail to scrape a top-four finish, then next season will be the first since 2002/03 that the Blues will not be participating in Europe’s biggest club competition.

Yet there is certainly a reason for optimism among the Chelsea contingent, as in Torres they have a striker who has a phenomenal record against the European champions.

Scoring seven goals in 10 appearances against the all-conquering Catalans, the hit-man, if selected, will have to be closely monitored by Gerard Pique, Carles Puyol and co.

"I have a good record against Barcelona, they are the type of team you have to defend well against and play on the counter-attack, which is the type of game I enjoy."

Torres will hope to play a key role on Wednesday as he looks to fulfil his boyhood dream of lifting the Coupes des Clubs Champions Europeens.