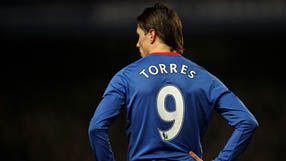 The Spain striker has failed to find the net in five appearances since his 50 million pounds move from Liverpool and was overshadowed by Nicolas Anelka who scored twice when Chelsea won the first leg 2-0 in the Danish capital.

Torres has struggled to reproduce the sort of form that prompted Chelsea to pay a British record fee for him.

"I'm quite sure the goals will come in due course because I always knew there would be a settling in period," he told the Spanish sports daily Marca.

Torres and Drogba played in tandem in the 3-1 Premier League win at Blackpool last week and failed to hit it off - the goals coming from stalwarts Frank Lampard (two) and John Terry.

While yet to make much of an impact on the pitch, Torres is at least saying all the right things and has set his sights on helping Chelsea win the Champions League after a run of heart-breaking near-misses.

"This club came within one missed penalty of winning the Champions League (in the 2008 final shootout against Manchester United) and you can feel it's something which slipped through their hands," he said.

"Just like everybody at Chelsea I'd give anything for this to be another double season - that's the dream," added Torres referring to the team's Premier League and FA Cup triumphs last year.

Copenhagen will have to improve dramatically on their first leg showing if they are to cause Chelsea, who also retain outside hopes of retaining their Premier League crown, any alarm.

The opening leg was their first match after the winter break and they looked off the pace. However, this time Copenhagen should be up to speed after a 1-0 victory at Aalborg on Saturday helped extend their lead in the Danish league to 19 points.

Jesper Gronkjaer, once of Chelsea, believes the Danes still have a say in the tie, even if the hosts have lost just one of their last 25 Champions League ties at Stamford Bridge.

"We have to believe in it," said the winger. "Obviously we are going to London to win. If we can score the first goal anything can happen."