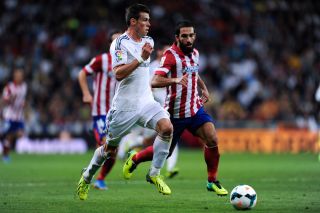 Toshack - who vacated the top job in Wales in September 2010 - said Bale could vie with fellow La Liga stars Messi and Ronaldo in the Spanish top flight.

The 64-year-old handed Bale his international debut in 2006, when the talented winger was just 16 years old, making him the youngest person to represent Wales, and Toshack heaped high praise on his former player.

"I don't want to go into the ins and outs of what he is worth but what I do know is that Bale is not very far from Cristiano Ronaldo and Messi's level," Toshack told radio station La Xarxa.

Toshack - now coach of Azerbaijan side Khazar Lankaran - said it was not Bale's fault his old club Tottenham and new side Real Madrid played out a long transfer saga, which led to a limited pre-season schedule for the Welshman.

Consequently Bale has played just 106 league minutes so far for Real but Toshack was confident the 24-year-old's quality would shine through eventually.

"He's had bad luck not to train during the summer, caused by the drama between Tottenham and Real Madrid but Bale is a fantastic player," Toshack said.

"There's no need to have any doubts about Gareth Bale, I can assure you."

Toshack also blamed the 100-million-euro transfer fee for Bale on the clubs' thirst to fight for the player's services.

Toshack, a former Real Madrid boss on two separate occasions, also said the youth at the Bernabeu would have to bide their time for first-team opportunities under coach Carlo Ancelotti and sporting director Zinedine Zidane.

"If people like Asier Illarramendi, Isco or (reserve team) Castilla's youngsters look at Ancelotti and Zidane's bench then it is imposing," the Welshman said.

"At the moment it is a difficult time for them because Barca are going well, with Madrid behind them in the table, but they must be given time."