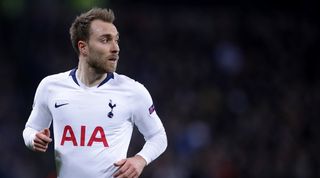 The Denmark international will have just one year left to run on his Spurs contract at the end of the season, and is reportedly a major target for Real Madrid this summer.

According to the Express, Eriksen has always harboured ambitions of playing for the Spanish giants, and the Premier League club are resigned to selling their playmaker in the close season, rather than risk losing him on a free transfer.

Barcelona are also believed to be interested in the 27-year-old, but his personal preference for Real could give them the edge.

However, Tottenham chairman Daniel Levy is said to have set a £200 million price tag for the midfielder, an astonishing fee that would see him surpass Neymar as the world’s most expensive footballer.

Spurs boss Mauricio Pochettino said in January that he hoped Eriksen would sign a new deal with the club to extend his stay in north London.

"It's a negotiation, it will be fantastic if he will commit to the club,” he said.

"It would be fantastic if he commits long term but he has every right to do what he wants.

"He is happy here, he is showing his commitment. Then what is going to happen between him and the club is not only in our hands."

Eriksen joined Spurs from Ajax in August 2013 and has scored 63 goals in 264 appearances for the club.