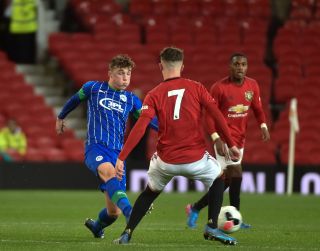 Tottenham have swooped to sign teenager Alfie Devine from Wigan for an undisclosed fee.

The exciting 15-year-old, who is an England youth international, has been brought to the Premier League club, which will raise important funds for the Latics’ battle with administration.

Devine is seen as one of the best prospects at the DW Stadium having impressed for their under-18 side on their run to the FA Youth Cup, where they beat Spurs along the way.

The midfielder, who was previously released by Liverpool, caught the attention of the north London club and has now completed a permanent transfer.

“Devine, 15, has starred for England’s under-16 side on the international stage and was part of Latics’ record-breaking U18s this season as Peter Murphy’s side reached the quarter-finals of the FA Youth Cup for the first time in the club’s history.

“We wish Alfie well in his future career.”

Wigan were relegated on the final day of the Championship season, but are appealing their 12-point deduction for entering administration.

Tottenham Under-18s coach Matt Taylor said: “Alfie comes to us hungry to develop and make progress, just like the 10 young men who have moved up from our under-16s this year.

“It’s an exciting time for these players as they start this new chapter in their lives as full-time employees of the football club and begin to understand what’s expected of them, taking on board the DNA of Tottenham Hotspur.”