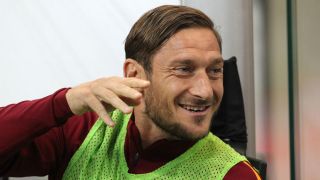 Luciano Spalletti feels there has sometimes been too much focus on Francesco Totti at Roma, with his profile used to cause problems at the Stadio Olimpico.

Totti, who has scored more goals and made more appearances for Roma than any other player, announced on Thursday that Sunday's clash with Genoa will be his last match for the capital club.

And coach Spalletti pointed to situations where Totti's role has worked to the detriment of the club, claiming the media use him to create tension.

"Nothing has irritated me," he told a pre-match news conference. "There were times when I didn't agree with his positions, but, in this case, I think all of us are at fault: we created this great player who can cover any situation and anything that is said about him, because he is Totti.

"In some cases, he needs to be understood more, because being captain of a team at times means donating all of yourself to others. He probably has done it and would do it, but the others didn't get the message.

"He was always put at the forefront of any performance, perhaps annulling the quality of another player. For a club, coach and fans, it should be Roma who win. Totti has won a great deal, but he alone is not enough and he knows that. We're here again saying that Roma haven't won silverware.

"Of course, [the media] will take all this and make it look as if I'm angry with Totti. I use the principle of [the media] and me, but it is turned into 'Totti and me'.

"A coach has to deal with 20 players - a whole dressing room - not just one. There was a time when Totti missed six penalties in a row. I went to other players and asked if they wanted to take the kick, but they all said they wouldn't when Francesco was there.

"Penalties make a big difference in the long run to the points. If you miss 100 and still insist on taking them, that's not fair to the group.

"Totti is a gift that has been given to football. However, he has also been at times used in a way that is not right. Certain headlines and front pages use Totti to create stories and situations."

But Spalletti insists he appreciates Totti's character, adding that he has carried Roma at times.

"The memory that ties me to Francesco the most is of the quality of this player and the character he shows when stepping onto the field," he said. "Pace, technique and physicality are all important for a player, but character is fundamental.

"When you are in a situation where everyone makes you feel uncomfortable, you take the situation in hand and say 'give me the ball and I'll show you'. It takes responsibility off the shoulders of others - he takes the team on his back."