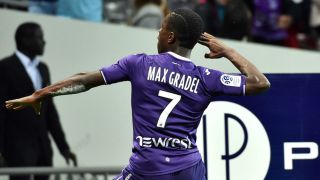 Toulouse took a huge step towards securing their Ligue 1 status with a 3-0 play-off victory over Ajaccio in Montpellier on Wednesday.

Max Gradel, Christopher Jullien and Yaya Sanogo were the first-leg goalscorers for a side who finished only one point from safety.

Having negotiated a penalty shoot-out at the end of ill-tempered semi-final clash with Le Havre which saw four players sent off, second-tier Ajaccio wilted against the backdrop of an empty Stade de la Mosson, which played host after the club was sanctioned following crowd trouble.

Coach Olivier Pantaloni was serving a touchline ban following his dismissal against Le Havre and his side now face an uphill task in Sunday's return meeting, having last featured in the top flight in 2013-14.

Gradel struck the opener with a superb free-kick in first-half stoppage time, the former Leeds United star netting his ninth goal of the campaign.

It took just six minutes of the second half for the visitors to further assert their authority, with Jullien volleying in from Giannelli Imbula's corner.

And the tie appeared to be put to bed by ex-Arsenal striker Sanogo's 65th-minute effort following a goalmouth scramble.