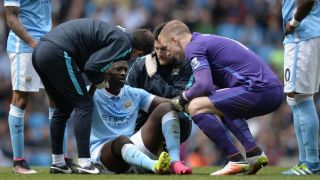 Yaya Toure is a fitness doubt for Manchester City ahead of their Champions League semi-final first-leg clash with Real Madrid on Tuesday.

The Ivorian midfielder appeared to be struggling late on in Saturday's 4-0 Premier League win against Stoke City, limping off before returning to soldier on to the final whistle.

Manuel Pellegrini had done his best to manage his squad's fitness with one eye on Tuesday's match - Vincent Kompany and Kevin De Bruyne were both rested, while David Silva, Sergio Aguero and Fernando were all substituted during the second half.

"The most important thing is the result but we need to play eight games in 30 days so it was important to make rotations," Pellegrini said.

"David Silva was just coming back from an injury so he played 60 minutes. Kun has been playing 90 minutes a lot so it was good for him to rest. It was the same thing with Kevin De Bruyne.

"Fernando has a little pain in his knee but I think he will be okay for Tuesday. Yaya finished with a muscle injury so we will see tomorrow with the doctor.

"It was a risk for Vincent to play two games in 72 hours. I think he will be okay for Tuesday - he worked this morning and he is not having any problems."

Fernando and Aguero gave City a 2-0 half-time lead at the Etihad Stadium, before Kelechi Iheanacho netted twice after the break to send City five points clear of fifth-placed Manchester United in the chase for Champions League qualification.

"I think it was the perfect match. It was important to have our mind focused on this game and not Tuesday," Pellegrini added.

"It was exactly the same against PSG - we had played well against Bournemouth. It's a good way to prepare for the Champions League.

"Big teams must be able to have their minds in all competitions and have good performances in them."