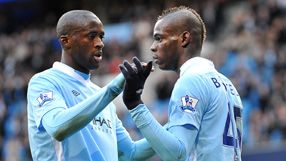 Reports have suggested the two clashed in the tunnel at half-time during the 3-3 draw with Sunderland, the first time the club had dropped points at home all season.

Toure maintains that there was no exchange during the half-time interval and that he and the controversial Italian have a good working relationship.

He told The Daily Mail, "They said I fought with Mario (Balotelli) at Swansea and against Sunderland. That shocked me.

"It's just not true. It didn't happen. I am a footballer, not a boxer. People don't know my relationship with Mario. He's not my friend, he's my brother and I love him. To say we had a fight is very sad. It upset me and I feel sorry for Mario. He suffers most from these things.

"At half-time against Sunderland it was very difficult. We are trying to win the league and are losing 2-1. It's not good. But everybody was quiet. We were just looking at each other, trying to find a way to turn the result.

"But I didn't even talk to Mario. The next day he sent me a text message saying, 'Apparently we had a fight'. I just want to stop people writing and thinking that."

Balotelli’s fledgling career in the Premier League has been dogged by a number of off-field incidents and he was involved in an on-the-pitch confrontation with full-back Aleksandar Kolarov over who should take a free-kick during the stalemate with the Black Cats.

Toure admits that he hopes the club attempt to keep hold of him over the summer, but is worried the young Italian does not help his own cause with his behaviour.

"The decision is down to the club," added the powerful Ivorian.

"But I want him to stay. He will have more experience in the future and get more things right.

"I don't know what goes through his mind sometimes and I do get upset when he does something wrong. He has to understand he plays for Manchester City and he has to be professional.

"Mario is a fantastic player and person but his big fault is in his character and behaviour with people. We talk about that."

Toure and Manchester City face a tough run-in to the end of the season, coming up against Arsenal at the Emirates Stadium on April 8th where they could find themselves eight points behind leaders Manchester United before they take to the pitch.

Should City navigate that fixture, Mancini will want to hope no more confrontations emerge between his players as the Citizens go in search of a maximum 21 points from their last seven games to bring the title to Eastlands for the first time in 44 years.