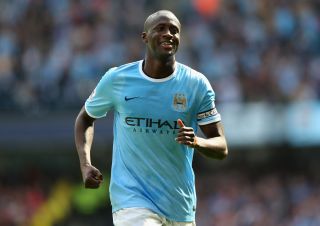 The Ivory Coast midfielder appeared to be the target of chants from some sections of the home crowd during the 2-1 victory at the Arena Khimki on Wednesday.

Afterwards he told Sky Sports News: "It's unbelievable. I think UEFA needs to do something strong."

Former Barcelona midfielder Toure believes Europe's governing body should take decisive action and possibly impose a stadium ban on CSKA if their fans are found guilty of abusing him.

He added: "I told the ref, I think it was unbelievable and very sad. We want to stop that. UEFA need to do something.

"Maybe close the stadium for a couple of games. As an African player, it is always sad when you hear something like that."

Toure also took to Twitter to underline his defiance and offer gratitude for the support he had received.

The 28-year-old Tweeted: "Thank you for your support! Hate or racism cannot affect me when so many people are showing me love and support on a daily basis!"

City boss Manuel Pellegrini also called for UEFA to act if they find that his player was subjected to abuse.

"It's a pity and I hope UEFA have the right measures," he said.