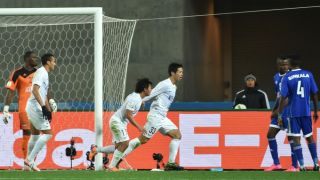 Sanfrecce Hiroshima set up a clash with River Plate in the Club World Cup semi-finals by overcoming TP Mazembe 3-0 in Osaka.

The J.League champions made their set-pieces count as they improved upon their 2012 performance when they were eliminated at the quarter-final stage by African side Al Ahly.

Sanfrecce took the lead on the stroke of half-time when Tsukasa Shiotani converted from Yusuke Chajima's corner.

The Japanese team enhanced their lead early in the second half when Kazuhiko Chiba headed home from another Chajima set-piece and the 2015 CAF Champions League winners were unable to find a route back into the game.

Second-half substitute Takuma Asano added a third third in the closing stages, meaning Mazembe will play America in the fifth-place play-off on Tuesday.

Sanfrecce came within inches of the opener inside two minutes when Yoshifumi Kashiwa checked inside Yaw Frimpong, but sent his cross-goal effort from just outside the left-hand corner of the box narrowly wide.

Roger Assale had his ambitious 35-yard strike turned behind by Sanfrecce goalkeeper Takuto Hayashi soon after and Salif Coulibaly glanced a header just past the post from the resultant corner.

Mazembe continued in a positive manner, but Hisato Sato failed to make the most of a swift counter-attack from the Japanese side, blazing over from 15 yards in the 19th minute.

The tempo slowed as both sides showed more caution, but Assale continued to threaten with a pair of efforts from distance.

However, Sanfrecce went into the break ahead as, in the 44th minute, Chajima's corner was flicked on at the near post by Sho Sasaki and Shiotani prodded into the net.

Mazembe set about getting an equaliser quickly after the interval, substitute Given Ulimwengu firing wide from 20 yards.

But they found themselves two goals behind in the 56th minute when Chiba headed beyond the helpless Sylvain Gbohouo from another Chajima corner.

Douglas could have added a third within a minute, but the Brazilian hesitated when one-on-one with the Mazembe goalkeeper and was unable to hit the back of the net.

The African champions came close to halving the deficit just after the hour mark when Rainford Kalaba's flick found Assale inside the six-yard box and his overhead-kick sailed over.

Douglas again showed a lack of composure when put through on goal another time, but the third goal came 12 minutes from time.

Asano had only been on the pitch for three minutes, but got on the end of Mihael Mikic's cross following a swift break to head beyond Gbohouo and end any chance of a late Mazembe comeback.