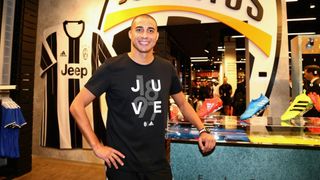 Former Juventus striker David Trezeguet feels the Serie A champions are at the same level as Bayern Munich, Real Madrid and Barcelona and has backed them to challenge for the Champions League in 2016-17.

Juventus were eliminated by Bayern in the round of 16 last campaign, having lost the final to Barcelona the preceding season, but Trezeguet has little doubt they can go further in the upcoming term following the arrivals of Miralem Pjanic and Dani Alves.

"I agree 100 per cent with Allegri that Juventus are at the same level as Bayern, Barcelona and Madrid. Those are the four top teams in Europe," Trezeguet told Tuttosport.

"The arrival of players such as Pjanic and Dani Alves shows that Juventus have reached the highest level. Those players clearly understand our goals and want to play their part. Dani Alves made it clear that he wanted to join Juventus and that says a lot. If players of his calibre join the club, that shows people believe in this project.

Paul Pogba and Leonardo Bonucci have been heavily linked with moves away from Juventus in recent weeks, with the Frenchman in particular believed to be on his way out following interest from Manchester United.

Nevertheless, Trezeguet has urged Juventus to hold on to the duo.

"It is important to hold on to Pogba and Bonucci because they are an integral part of a team that is still growing," he added.